“It sounds fanciful, but I would hope that the work would let Aberdeen see itself anew and recognise that change is inevitable and refreshing – that its history is one of change, of ebb and flow; that travellers, incomers and immigrants revivify a place to its benefit.” Audience feedback

What Country Friends Is this? is a dialogue between the past, present and future. In 1601 the King’s Players visited and performed in Aberdeen. At this time playing companies toured throughout Europe including Poland. Taking inspiration from this historic visit, and rooted in Aberdeen’s harbour life, our emerging performance weaves stories of migration from Aberdeen’s Polish community, with extracts of Twelfth Night, one of the plays playing companies probably performed at this time.

What Country Friends Is this? is presented in partnership with the Centre for Early Modern Studies at the University of Aberdeen and Shakespeare.scot. 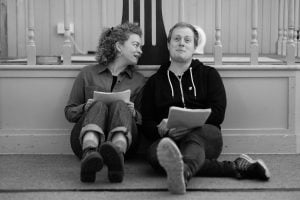 Alasdair Hunter | Director
Alasdair Hunter is Artistic Director of Shakespeare.scot – a global Shakespeare company rooted in Scotland. Alasdair has directed 13 of the 38 plays by Shakespeare. This mission is ongoing.  He worked closely with Ben Crystal’s Passion in Practice company on experiments in Original Pronunciation in the Sam Wanamaker Playhouse at Shakespeare’s Globe. He is a Connections Director for the NT Connections team at the National Theatre, a member of the Shakespeare Theatre Association and a past president of Glasgow’s Queen Margaret Union.
Training: University of Glasgow & Royal Conservatoire of Scotland.  Twitter: alasdair_h

Andrew Gordon | Academic Partner
Andrew Gordon is Professor of Renaissance Literature and Culture at the University of Aberdeen, where he also co-directs the Centre for Early Modern Studies. His books and articles have explored diverse topics from the politics of memory to the idea of the footprint. He has a particular interest in the relation between early modern drama and urban experience.

Lesley Anne Rose | Writer
As a playwright Lesley Anne has had work commissioned and produced in regional theatre, literature festivals and pub theatre. As a travel writer her published and commissioned work includes guidebooks, articles and travel columns covering independent, off the beaten track travel and eco-tourism. She is a member of Scottish Pen – a not-for-profit organisation which champions freedom of speech and literature across borders.

Beata Tschirch | Interviewer & Researcher
Beata is an engineer, a mindfulness teacher, a researcher into Mindfulness and Creative Writing at the University of Aberdeen and a journalist. She has undertaken research into and with the Polish Community in Aberdeen’s well as the migration of Scots to Poland. She commented on political and social matters for BBC’s Alternative Brexit Cabinet. She lives in Berlin where she teaches trauma-sensitive mindfulness in one of the city’s women’s organisations.  As a member of Shut up and Write, Berlin’s writers group and she often hangs around in the darkest Kreuzberg’s bars.

With thanks to the Fittie Community Development Trust, the Polish Scottish Song Group, the WORD Centre for Creative Writing at the University of Aberdeen, Aberdeen Performing Arts for their continued support of this project, as well as the city’s Polish community for their generosity with sharing their stories.

Further project development includes building relationships with people of Scottish heritage in Gdańsk as well as the Gdańsk Shakespeare Theatre and festival.

The development of this project has been supported by Creative Scotland 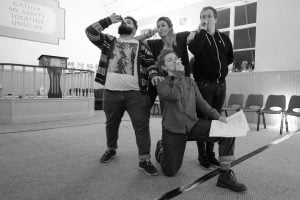 Cast from the development performance

EmmaClaire Brightlyn – Cast
EmmaClaire Brightlyn is an actor based in Glasgow and Toronto. She was Artistic Associate at Solar Stage Theatre, and was nominated for a Dora Mavor Moore Award for her performance in The Ugly Duckthing, Marty Stelnick’s wacky adaptation of the Hans Christian Andersen classic. In 2016, she performed in becoming by Kathy McKean, a one-woman show about Rome’s greatest gladiatrix on the day of her last fight. Recent theatre credits include: Queen Lear, Timon of Athens, Richard II (Bard in the Botanics), Killed with Kindness (Wee Theaters, Glasgow), The Love of the Nightingale (rehearsed reading, Dundee Rep), Little Princess Goldtree (Yugen Puppet Company), Medea (Unsub), Calvinball, Anonymouse (Ipdip Theatre). Select film credits: Mannequins (Blistered Pictures), 425 Calories (Bewildered Heid), The Problem With Money (Lyre Productions), Believe (Cloverlea Films) Where Do We Go From Here?, Doug and Steve’s Big Holy Adventure, V is for Visa, and the award winning Notes(Worrying Drake).

EmmaClaire gained her MA from the RSAMD (now RCS) in 2010 and also works internationally as a Fight Director, Instructor and Voice Over Artist, and she is the Artistic Director of the International Order of the Sword and Pen.

Ewan Somers – Cast
Ewan trained at the Royal Central School of Speech and Drama. Theatre credits include: This Girl Laughs, This Girl Cries, This Girl Does Nothing (Stellar Quines), All My Sons, Much Ado About Nothing (Ian Charleson Award nomination), Love Song, Little Red and the Wolf and Witness for the Prosecution (Dundee Rep), Cyrano de Bergerac (National Theatre of Scotland), Macbeth (Stafford Gatehouse), Faithful Ruslan: The Story of a Guard Dog (Belgrade Theatre Coventry and Glasgow Citizens Theatre), Travels With My Aunt, Rapunzel, Lot and His God and Lanark (Glasgow Citizens Theatre) and Tomorrow (Vanishing Point, International Tour). Screen credits include: Outlander (Sony/Starz/Leftbank)