Breathe with me. Breathing in, relaxing down, feeling the weight of your fluids sinking into the floor. Breathing in through your nose, allowing the lungs to fill, feeling the soft tissues expanding forwards and backwards, up and down, feeling your ribcage gently moving. Allow yourself to release any tension, letting your eyes relax and the tongue. Sensing your internal rhythm, feel the lungs lifting the heart with each in-breath.

ALIVE is a solo performance project created by dance artist Skye Reynolds and director Susan Worsfold that explores the intimate and universal themes of life and death. The project was conceived in, and inspired by, the medical history of Aberdeen’s Anatomy Rooms as a former dissection room and the experience of losing a loved one. Today the Anatomy Rooms is a space where artists and artistic practice is supported and nurtured. With the audience gathering close, ALIVE gently holds space for us to face transformation, for ourselves, but also for the space and the city the show is created in, the cultural sector reeling from a global pandemic and the wider world.

“ Alive is a meditation and celebration of the beauty and fragility of life. Moving, meaningful and reflective, this work has potential far beyond the confines of the theatre space. ”
Audience feedback 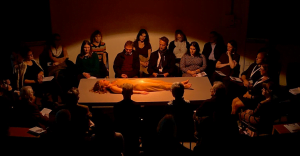 A body is lying on a dissection table. Emerging from a meditative darkness, the audience gather close as an evocative Bodytext is delivered live. Instructions for anatomical dissection are layered somatically with the poetics of memory and desire.

ALIVE inspired by, and created in gratitude to, Skye’s 25 year friendship and mentorship with the late Janis Claxton – choreographer, dancer, producer, advocate and teacher.

ALIVE is created for an intimate audience and can be performed in either a traditional theatre or site specific setting. The ever evolving bodytext responds and adapts with each audience and deepens with the artists’ continued practice.

Within the choreographic frame of the table, the body comes to life through a dynamic interplay of sensation, momentum and physicality, paying attention to the resonant proximity between audience and performer.
The final eulogy celebrates the passing of a loved one, sharing a ritual of song as lights goes down upon the body in an image of suspended falling.

Creative research for the production is rooted in movement, anatomy, language and voice. The show is a crystallisation and a synthesis of a continuous research into being present with oneself, with others and with living memory. Skye and Susan have been deeply touched by the transition from the living body to the dead body, provoking exploration into how we walk this journey with a decaying body, but an internal growth. We want to be present with being alive.

Humans have a curiosity about death and dissection. ALIVE creates a safe space for people to explore the pathway between life and death, to both reflect upon and celebrate what it is to be alive. The work leaves a resonant space with time for personal reflection.

“A really thoughtful and beautiful piece of work.”
Audience feedback

ALIVE has been supported by residencies with The Work Room, Citymoves Dance Agency and Summerhall. Aberdeen City Council and Citymoves co-commissioned the work to open DanceLive 2019 where it responded to, and was performed in, a former Anatomy Lecture Theatre within a University of Aberdeen owned building to a sold out dance audience. The building is where Scottish forensic anthropologist and author of All That Remains Professor Sue Black trained.

Skye Reynolds
Skye Reynolds is a Scottish-based dance artist, performance maker and educator working across multidisciplinary platforms in the UK and abroad. Her practice navigates the edges of dance, drawing upon theatre, comedy and the politics of real life. Performance collaborations include projects with Janis Claxton Dance, Curious Seed, Wendy Houstoun and Derevo. Her solo work PITCH was created with choreographer Jo Fong and toured Scotland/ Wales 2016-17 supported by Creative Scotland. She was a Dance Artist in Residence with Imaginate Children’s Festival and has twice been invited to Iran to co-devise new dance-theatre with British Council / Fadj International Festival. She was Movement Director for The Panopticon , National Theatre of Scotland, 2019 and is currently developing new work with playwright/ performer Jo Clifford. Skye co-curates Something Smashing improvised performance events and is an Associate Artist with Starcatchers. She is training in the Feldenkrais Method.

Skye’s solo work PITCH integrated movement & spoken word into a form she describes as ‘Stand Up Dance.’ It was performed as if it was being created in the moment, but in fact the choreography and text were entirely pre-determined. Since then Skye has been experimenting with her Stand Up Dance practice in a variety of performative contexts.
https://skyereynolds.com

Costume design consultation by Anna Cocciadiferro http://www.cocciacostumier.co.uk
Anna is a costumier with a specialist interest in installed costume as an interactive learning tool for museums and other public spaces. She runs community art projects within schools and the wider community and design for theatre, dance and performance art. She also uses constructed textiles to explore and exhibit fascinations with biomimicry.