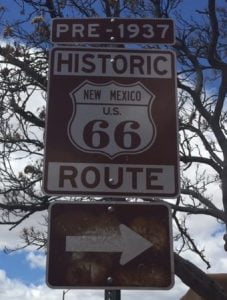 “Santa Fe, it’s a place for dreamers” a local artist told me as I bought one of her prints called ‘Beginnings’, its colours as vibrant and stark as the surrounding landscape that inspired it. She’s right, the centuries old high altitude city of Santa Fe is a place for dreamers, romantics, writers and outsiders of all kinds.  Founded by Spanish colonists in 1610, and rising from foundations rooted in former Pueblo Indian villages, Santa Fe defies time. And, although proud of the past it has never let go of, New Mexico’s capital also presents a flair for contemporary, off the beaten track chic.

Arriving from the east, you’ll follow the trail of Route 66, America’s Mother Road, which cuts an historic, pre 1937 path directly through Santa Fe’s equally historic downtown.  En-route travellers are greeted at the state’s border with a sign welcoming you to New Mexico – Land of Enchantment.  As you cross the border you also cross time zones into Mountain Time, and the more the dust of Texas settles behind you, the clearer the view of the Sangre de Cristo Mountains, which rise to the north of Santa Fe, becomes.

Known as the ‘heart of Santa Fe’, the city’s four hundred year old plaza, marks the centre of town. A gathering place for local street musicians and artists, the Plaza is a natural focal point for visitors gaining their bearings in a city that’s best explored on foot. The oldest public building in the US, the Palace of the Governors, lines the north side of the Plaza. Former home of the first Spanish governor of New Mexico in 1610, the Palace is now the state’s history museum and an ‘American Treasure’.  Today Pueblo Indians, who briefly occupied the Palace following a revolt in 1680, gather beneath its long portico to sell locally made jewellery, pottery and other crafts.

However, the real charm of Santa Fe, which translates into ‘holy faith’ in Spanish, lies in the grid of side streets and narrow alleyways that scatter in multiple directions from the Plaza.  Take time to linger in the Romanesque St Francis Cathedral, built in the late 17th century from yellow limestone whose soft bells chime across Santa Fe’s low rise downtown. Then let go of all sense of time and get lost in the city’s independent bookstores, high end clothes shops, pavement cafés and artist galleries all tucked away in Santa Fe’s rambling side streets.

Santa Fe is one of the USA’s six UNESCO Creative Cities. A status acknowledging the central part culture, craft and folk art plays in the life of the city – past, present and future. Artists, their studios, along with shops and stalls selling their work, take centre stage in Santa Fe’s downtown, from its Plaza to its public art. Georgia O’Keeffe first visited New Mexico in 1929, making it her permanent home 20 years later. You can experience the world’s largest collection of her work at the downtown Georgia O’Keeffe Museum. However, it’s well worth travelling 50 miles north to the artist’s former home and studio at the remote Abiquiu.  While the New Mexico Museum of Art and the Museum of Contemporary Native Arts can both be found in the streets surrounding the Plaza.

“Get art to wear, that’s what I always say”, I overheard a local lady who likes to lunch claim in Café Grecian on Canyon Road. And there’s no better way to experience the sheer diversity of art to wear, or put on a wall, created by Santa Fe’s many talented artists than to stroll along this peaceful road. Here, a few blocks south east of downtown, around a hundred galleries, shops and restaurants line the first mile of Canyon Road, as it meanders its artistic way out of town and towards the mountains.

The stark beauty of New Mexico’s deserts and mountains, famous for the natural light that enchants its artists, also has a dark side.  Built on the Pajarito Plateau, 35 miles north west of Santa Fe, the mountain town of Los Alamos, otherwise known as Atomic City, is home to the National Laboratory where in the 1940s Oppenheimer, an American theoretical physicist, developed the science behind the atomic bomb. A trip to Los Alamos is worth it for the sweeping mountain views alone. However, also make time to visit the Bradbury Science Museum to discover the history behind the National Laboratory and take a stroll along Bathtub Row where Oppenheimer’s secluded former house still stands. 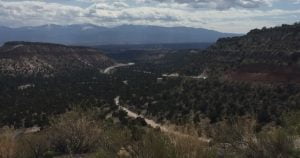 Tucked up close to the border of Colorado, high in the Sangre de Christo Mountains sits the town of Taos, former home of frontier legend Kit Carson and a place for dreamers and artists of all kinds. Taos is the best place in New Mexico to visit a Native American Pueblo – a multi storied traditional building, containing numerous homes all created from earth and straw. A UNESCO World Heritage Site, the Taos Pueblo has been continuously occupied for around 1000 years and it was here in 1925 that psychiatrist and psychotherapist Carl Gustav Jung first met a Native American community. Jung describes the profound influence this meeting had on him and his thinking in his book Memories, Dreams, Reflections, detailing the community’s ability to connect with the mythic world, a place lost to European rationalist thinking.

Drive back to Santa Fe via NM68 ‘the low road’ which follows the path of the Rio Grande river as it cuts a dramatic narrow canyon path through north New Mexico on its journey south from Colorado to the Gulf of Mexico.  A route favoured by kayakers and river rafters, the path of the river is an ideal place to reconnect with the mythic world that so influenced Jung. Once there you’ll join the artists, dreamers, frontier legends and pioneering scientists all continually inspired by the light and the landscape of the Land of Enchantment.

Tell me more about visiting Santa Fe and New Mexico

Somewhere to eat: The Tabla de Los Santos restaurant on the first floor of the Hotel St Francis creates frequently changing menus bursting with the best in local produce and seasonal flavours. For less formal dining choose from either the restaurant menu or bar menu at the Blue Corn Café and Brewery. 113 Water Street, Santa Fe, New Mexico, 87501.

The Palacio Café nestled in the side street shadows of St Francis Cathedral is an off the beaten track breakfast or lunch option. 209 East Palace Ave, Santa Fe, New Mexico 87501.  Or join the line up of locals for lunch to go from the Bad Ass Sandwich Co. on W. Palace Ave.

Somewhere to drink: The Hotel St Francis’s Secreto Lounge is celebrated for its award winning ‘garden-to-glass’ cocktails, shaken not stirred from local fruits and herbs.