‘You live like this, sheltered, in a delicate world, and you believe you are living. Then you read a book, or you take a trip, and you discover that you are not living, that you are hibernating…. And then some shock treatment takes place, a person, a book, a song, and it awakens them and saves them from death’  Anais Nin, The Diary of Anais Nin, Vol 1: 1931 – 1934

So as dust settles on my Travels With Elvis trip, I’m starting to pull together the meaning of it all and ideas for the work that will be created out of it. And along the way share some stories, incidents, inspirations and work in progress.

Believe it or not my trip wasn’t all about Elvis. An equal inspiration was Elvis’ ancestor Andrew Presley, who emigrated from Lomnay in north-east Scotland in 1745 to North Carolina.  The journey from emigrant to super star in a handful of generations is the embodiment of the American Dream, a dream of growth, pioneers and the never ending journey west. A dream perfect for its time, but one that even Adam Smith said could not last.

So as the planet and all the species who live here start to collapse around us, and a realisation that the pursuit of individual wealth doesn’t bring inner peace, like many I’m starting to seek alternative dreams to nail my colours to. 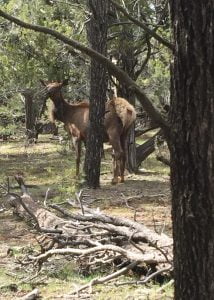 At no point on my trip was this impressed upon me more than at the edge of the Grand Canyon. En route to the cliff edge along a trail far away from the tourist hot spots, a wild deer crossed my path, turned round and looked me straight in the eye.  The deer was huge and powerful, while I was ineffectual if it took a dislike to me. Yes it’s obvious, but on that isolated track facing off a large wild animal I understood my place and felt small and accused of not doing enough, or stepping up, in trying to make a difference and to stop the planet being destroyed.

Nothing prepares anyone for the enormity, the eternity and power of the Grand Canyon and when I finally got to the edge I discovered I’d stumbled into a private family gathering, a scattering of ashes of a favourite old relative over the sheer cliff edge at our feet and into the rusty red and golden abyss below.  Yes we all know life is short, but at moments like this it shrinks even more.

I moved away from their private celebration of life and walked further down the cliff edge. And while I could still hear the many recollections, memories and anecdotes of the life now in ashes, I could no longer see them or they me. In the privacy of this place I took out my dashboard Elvis whose picture I was taking wherever I went.   I balanced him on tree by the edge of the Canyon to get a prime shot and I suddenly realised I wanted to bury him here too. Lay him to rest in peace and dignity, in a landscape as epic and as legendary as he was.

Or rather I wanted to bury the dream he stood for, because the planet can’t sustain a dream of growth and our spirits can’t sustain the duality and inequality of haves and have nots and the fear based beliefs and political rhetoric that prop it up. And as borders and boundaries are challenged, broken through and demand redefining, our creaking economies can no longer afford the massive spend on defence programmes to protect it. 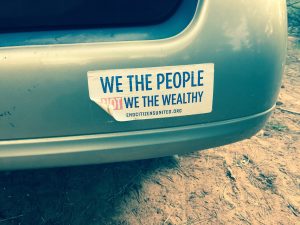 After a long time staring into the unreal and overpowering enormity of the Canyon, I turned away from the cliff edge back to the trail that brought me, Elvis and the American Dream here. In doing so the first thing I saw was a car bumper sticker demanding ‘we the people, not we the wealthy’. As I stood taking in the message I heard behind me the moment being marked and the last remains of a life released into a physical and metaphysical eternity. I said a prayer to the life whose last moments I had been privileged to share, put the dashboard Elvis into my pocket and headed back through the forest. Our journey together was still far from over, but neither of us would ever be the same again.